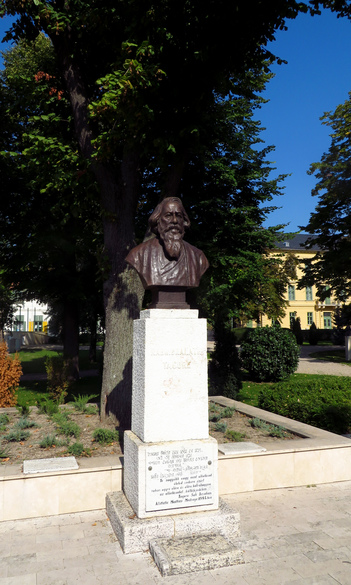 In February 2007, paying tribute to the memory of Rabindranath Tagore, the Indian Council for Cultural Relations (ICCR) and the Eötvös Loránd University signed a Memorandum of Understanding on the establishment and awarding of the Rabindranath Tagore Research Scholarship recognizing the opportunities of the bilateral cooperation, and taking into consideration that the ICCR sets a high value on the education and research work of the Department of Indo-European Studies (currently Department of Indian Studies) and acknowledges the importance of Indian Studies in Hungary.

The Tagore Fellowship is a great support for the young Hungarian Indologists as well as the Department of Indian Studies. It provides an opportunity to offer a wider range of classes at the Department and enables its holder to gain teaching experience as well as to carry out serious research, to publish his or her results and to introduce oneself to the international academic community.

Dr. Gergely Hidas was the first young researcher who held the Tagore Research Scholar position at the Department from September 2007 to August 2010. During this period he taught various courses on the history of Indian religions, and lectured on texts of different genres in Sanskrit and Pali languages. In 2008 he submitted his doctoral thesis to the University of Oxford and received a doctoral degree (DPhil) in 2009. In 2010 the revised version of his thesis was accepted for publication by the International Academy of Indian Culture directed by Prof. Lokesh Chandra in New Delhi and at the end of 2011 Aditya Prakashan brought out the book in its renowned “Śata-Piṭaka Series”. This volume contains the first critical edition and modern translation of a fifth-century Buddhist scripture titled Mahāpratisarā-Mahāvidyārājñī based on important manuscript heritage from Gilgit, Eastern India and the Kathmandu Valley. After completing his Tagore Research Fellowship Dr. Hidas took up an eighteen-month post-doctoral position at the Department in September 2011. He continued teaching Sanskrit and Pali and simultaneously embarked upon a new research project, the edition and translation of the Mahāsītāvatī, another less-studied Sanskrit scripture. For his research Dr. Hidas used old palm-leaf manuscripts from South Asia and a recently discovered Sanskrit manuscript from Tibet. In 2010/11 he attended various conferences in Hungary, Germany and Indonesia, wrote two journal articles and became a board member of the János Szerb Foundation in Budapest. He was awarded with the Bolyai Research Fellowship between 2013–2016. From November 2014 he worked in the ERC Synergy Project “Asia Beyond Boundaries”.

The second Tagore Fellow, Dr. Csaba Kiss graduated from Eötvös Loránd University, Budapest, in 2000 (MA in English Language and Literature and Indology). He holds a DPhil degree from Oxford University (Oriental Studies). His doctoral thesis (entitled “On the Sanskrit Matsyendrasaṃhitā. A Critical Edition and Annotated Translation”) focuses on the transitional era between late Śaiva tantra and early haṭhayoga and the Kubjikā tradition. His main field of study is early Śaiva tantra, especially the Brahmayāmalatantra, which he was studying and editing for three years within the framework of the Franco-German project “Early Tantra”. His other publications include a collection of Hindi folk tales translated into Hungarian and articles on Śaiva topics. As a Tagore Fellow he taught several courses on Sanskrit literature and Indian religions at the Department.

The third Tagore Fellow was Dr. Dániel Balogh, who was awarded the three-year Tagore Research Fellowship in January 2014. He worked on his PhD thesis and also taught Sanskrit classes at the Department. His dissertation is concerned with the contextual ties of the Sanskrit drama Mudrārākṣasa, investigating the ways in which various aspects of the play are connected to both earlier and subsequent works of Sanskrit literature. This results in a representation of an ancient Sanskrit opus not as a dead piece of dry literature, but as an organic component of a living web of tradition. The research involved in achieving this dissertation extends from the examination of millennia-old texts, including manuscripts several centuries old and never before published, as well as the study of an immense range of “modern” scholarly texts whose date range extends from the late 18th century to 2015.

Róbert Válóczi was selected as the fourth Tagore Fellow in September 2015. During the tenure of his fellowship he successfully finished his PhD classes at Eötvös Loránd University’s Doctoral Programme in Ancient Studies with excellent results and now he is working on finalizing his PhD thesis about classical Indian theatre. He also published scholarly articles and held classes in his field of research, so he utilized his fellowship in a very fruitful way. Róbert Válóczi has been offered a research assistantship by the Ferenc Hopp Museum of Asiatic Arts after his Tagore Fellowship expired in the beginning of 2016.

Dr. Ibolya Tóth was the last Tagore Fellow from 2016 to 2019. With the support of the Fellowship she finished her PhD programme at Eötvös Loránd University, Doctoral Programme in Ancient Studies and defended her thesis entitled “Beginnings of the Epigraphical Tradition in India, with Special Regard to the Cultural Exchange Between India and the Hellenistic World”. This topic necessitated a close textual study of India’s earliest epigraphical finds, Aśoka Maurya’s Rock and Pillar Edicts. Her focus was on a group of relatively neglected texts, the so-called Minor Rock Edicts. By creating a searchable database of all Aśokan edicts, a systematic comparison of textual subtleties became possible. Hopefully, this electronic database will soon be shared with the wider public to facilitate further work on the subject.